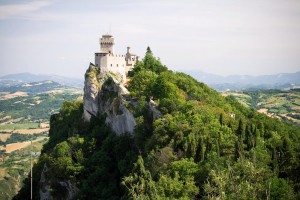 Located in the Republic of San Marino, this small city located on the North eastern side of the Apennine Mountains is home to around 4,000 and is the capital city of the San Marino Republic today. Founded in the 4th century, the area of San Marino is known most for its castles today. A UNESCO World Heritage site, the first, second and third “castles” stand near San Marino the city. Known as the Towers of San Marino they offer a unique look into the history of the area and are the most popular features of the city today.

The First Tower dates back to the middle ages. Built directly on the rock itself, it has no foundation and dates back to the 10th century. Throughout the years, the structure has been reinforced may times and in the 16th century a gabled roof was added. Called the Guiaita Rocca, this powerful tower was used as a refuge for residents of San Marino during sieges. In addition, some towers located within the First Tower were used as prisons even up until the 1970’s. Opened throughout the year, the tower is closed only on three days which include January 1st, December 25th and November 2nd (in the afternoon).

Located on the top of Mount Titano, this castle called Cesta Castle or Fratta, was built at the end of the 11th century. Like the First Tower, it has a pentagonal floor plan and housed the Fortification Guards Division as well as some prison cells. Used for years, the castle fell into disrepair in the 16th century. In the 1930s, the addition of the Rimini San Marino Railroad led to the castle being restored and today, it offers visitors a look into the past history of the area including housing the Museum of Archaic Arms which included over 500 pieces including spears, arms, bows and Armour dating back hundreds of years.

This tower dates back to the 13th century. The smallest of the towers, it played an important roll in the areas defense in the past. Another pentagonal floor plan, this fortress has been restored many times including in 1935. Within this tower, a prison is located almost 30 feet below the ground, named the “bottom of the tower”.

In addition to these and other monuments, a number of Museums are located here as well as fine hotels, restaurants, shopping and many arts and cultural activities as well.