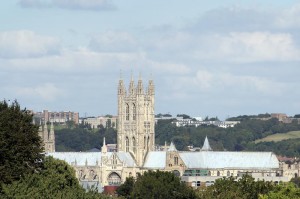 Canterbury is one of England’s most esteemed cities. It is a historic cathedral city that lies at the heart of the City of Canterbury, a district of Kent in South East England. It is on the River Stour. The city of Canterbury offers 2,000 years of history with Roman and early Christian ruins, a Norman castle, Tudor houses and a famous cathedral that dominates this medieval town. Parts of the city have been designated UNESCO World Heritage Sites. Canterbury is a popular tourist destination that can get quite crowded during the high tourist season.

The center of Canterbury is enclosed by a medieval city wall that is easily covered by foot.  Canterbury’s greatest treasure is its magnificent cathedral. Canterbury Cathedral is one of the most famous religious structures in the world. Canterbury Cathedral is the Mother Church of the Anglican Communion and seat of the Archbishop of Canterbury.  It was founded in 597. Thomas Becket was murdered here by four of Henry II’s knights in 1170. This led to the cathedral becoming a place of pilgrimage for Christians worldwide. This pilgrimage was immortalized in Geoffrey Chaucer’s 14th-century literary classic The Canterbury Tales. The cathedral is open weekdays from 9am until 7pm.  A guided tour is recommended.  There are also services provided here, sometimes three or more times a day. There are over a million people that visit annually. The remnants of the Norman Canterbury Castle and St Augustine’s Abbey are open to the public. The Old Synagogue at Canterbury, now known as the King’s School Music Room, is one of only two Egyptian Revival synagogues still standing.

There are numerous walks around the Canterbury area taking you through beautiful countryside and coastlines and you can also follow part of the route of the Canterbury Pilgrims. Not far from the city center is Herne Bay.  Herne Bay offers British seaside magic. Brightly colored beach huts line part of the water’s edge and beyond. In the summer months jet skiing and other water sports are available, as well as the Herne Bay Festival.