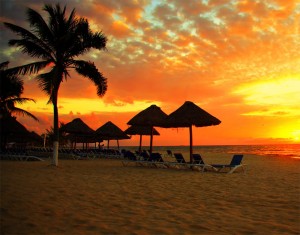 Puerto Rico is two and a half hours from Chicago, Miami, and New York and features nonstop flights. Puerto Rico is only 100 miles long by 35 miles wide, making it the smallest island of the Greater Antilles. Numerous other small cays lie offshore of Puerto Rico.

Mona and Monito are located between Puerto Rico and the Dominican Republic. These small islands are considered the Galápagos Islands of the Caribbean Sea. No other reef and offshore island habitat within U.S. jurisdiction possesses such ecological uniqueness, invaluable habitat, and biological diversity within such a reduced surface area. For these reasons, Mona and Monito Islands have been recognized by the Commonwealth of Puerto Rico as a Natural Reserve. The islands are a critical habitat of endangered marine turtles, sea birds and occasional migratory marine mammals.

As a U.S. territory in the Caribbean, Puerto Rico is a favorite destination for Americans looking for warm-weather fun with a distinctly Latin flavor without the hassles of foreign currency and passports.  The many full service resorts exert a pull for tourists to stay in their resorts, but at dinnertime there is the burgeoning dining district of South Fortaleza Street in Old San Juan.  This area lures foodies with the promise of some of the best cooking on the island. The Cathedral of San Juan Bautista is the oldest buildings in San Juan, and is the second oldest cathedral in the Western Hemisphere; construction began in 1521.

A 25 mile drive from San Juan, Caribbean National Forest, known locally as El Yunque, is a 28,000-acre reserve that looks much like it did in Columbus’s day, save for the addition of well-marked hiking trails that snake through the deep vegetation to swimming holes and observation towers.  Off the eastern shore, Vieques, once owned by the U.S. Navy, has beautiful beaches.  At night Mosquito Bay glows with an otherworldly light created by billions of bioluminescent microorganisms that outline swimmers bodies.  The best weather to be had in Puerto Rico is from mid-December through mid-April.

You can enjoy exotic locations without even leaving the U.S. Puerto Rico, Hawaii and the British Virgin Islands are just some of the amazing off shore destinations that the U.S. has to offer. Find out what makes our country and its wonderful destinations great ways to travel with reviews about this and more from Tradewinds Vacations Club.