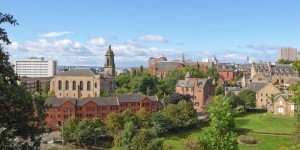 Glasgow is the largest city in Scotland and third most populous in the United Kingdom. The city is situated on the River Clyde in the country’s West Central Lowlands. Glasgow is the most Scottish of cities, a unique blend of friendliness, urban chaos and black humor.  There are some excellent art galleries and museums, most of which are free, cost efficient restaurants, countless pubs and a lively arts scene.  Glasgow has some beautiful Georgian and Victorian architecture and an energy that’s lacking in the more sedate Edinburgh.

Most of Glasgow’s museums are free and open 10am-5pm daily. George Square is surrounded by imposing Victorian architecture, including the post office, the Bank of Scotland, and the extravagant 19th century City Chambers, which offers free tours at 10:30am and 2:30pm weekdays.  The Glasgow Cathedral, which started construction in 1238, is regarded to be a perfect example of pre-Reformation Gothic architecture.  St. Mungo, Glasgow’s 6th century founder, is buried here.  Beside the cathedral is the St. Mungo Museum of Religious Life and Art.  It has Dali’s Christ of St. John on the Cross, statues of the Buddha and Hindu deities, and Britain’s only Zen garden. Sauchiehall St that runs along the ridge in the northern part of the city has a pedestrian mall with shops at its eastern end and pubs and restaurants on the west end. Glasgow has some superb Art Noveau buildings designed by Scottish architect Charles Rennie Mackintosh.  The Glasgow School of Art is a stunning example of his work, they offer tours Monday-Saturday for a nominal fee.

Of course Glasgow is home to great musical festivals as well.  The West End Festival of music and arts runs for 2 weeks in June and is the city’s largest festival. The West End Festival in Glasgow was started in 1996 by Michael Dale as a small local festival and has since become the biggest festival in Glasgow with events running for 16 days in June. During the festival a wide range of activities and events take place such as live music, outdoor theatre, comedy, drama, guided walks, talks, film, children’s events, various local street celebrations and markets, and a well-known Carnival Parade and Street Party on the opening Sunday.

Tradewinds Vacations invites you to explore top areas for travel with us.