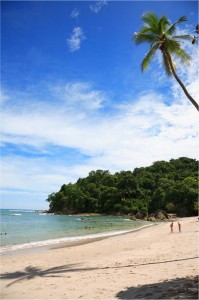 The Côte d’Azur, often known in English as the French Riviera, is the Mediterranean coastline of the southeast corner of France, also including the sovereign state of Monaco. There is no official boundary, but it is usually considered to extend from the Italian border in the east to Saint Tropez, Hyeres, Toulon or Cassis in the west.

This coastline was one of the first modern resort areas. It began as a winter health resort for the British upper class at the end of the 18th century. With the arrival of the railway in the mid-19th century, it became the playground and vacation spot of British, Russian, and other aristocrats, such as Queen Victoria and King Edward VII, when he was Prince of Wales. In the summer, it also played home to many members of the Rothschild family. In the first half of the 20th century it was frequented by artists and writers, including Pablo Picasso, Henri Matisse, Edith Wharton, Somerset Maugham and Aldous Huxley, as well as wealthy Americans and Europeans. After World War II it became a popular tourist destination and convention site. Many celebrities, such as Elton John and Brigitte Bardot, have homes in the region. Officially, the Côte d’Azur is home to 163 nationalities with 83,962 foreign residents, although estimates of the number of non-French nationals living in the area are often much higher.

Its largest city is Nice, which has a population of 347,060. The city is the center of a communauté urbaine – Nice-Côte d’Azur – bringing together 24 communes and over 500,000 inhabitants in the urban area. The French Riviera is a major yachting and cruising area with several marinas along its coast. According to the Côte d’Azur Economic Development Agency, each year the Riviera hosts 50% of the world’s super yacht fleet, with 90% of all super yachts visiting the region’s coast at least once in their lifetime. A super yacht generally refers to any yacht over 197 feet.  As a tourist center it benefits from 300 days of sunshine per year, 71 miles of coastline and beaches, 18 golf courses, 14 ski resorts and 3,000 restaurants.

Tradewinds Travel welcomes you  to visit and explore great destinations on travel with us.