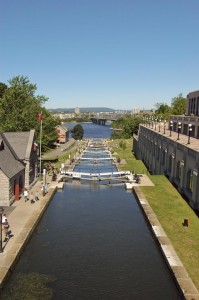 Tradewinds Vacations Club invites you to take a trip to Lake Ontario. Stunningly beautiful, rich in history and site of the UNESCO World Heritage Site Rideau Canal, we invite you to explore.

Also known as the Rideau Waterway, this canal links the city of Ottawa to the city of Kingston on Lake Ontario. Rideau translates in French to curtain which hearkens to the “curtain like” appearance of the river’s twin waterfalls where they meet the Ottawa river. The actual canal uses a number of sources including lakes and rivers to make its way from one lake to the other along the way and was opened in 1832. Though its roots are in war, its use today is pleasure. Operated by the parks system, it was originally built in case of a war with the U.S. In 2007, this oldest continuously operated canal system in North America, was registered as a UNESCO World Heritage Site.

Considered a visitors paradise, the locks, the canal and many historic structures in addition to trails, many lakes and rivers and the visitor center make up the entire area known as the Rideau Canal National Historic Site. Popular summer activities include paddling the canal or perhaps just taking a boat through the canal as well. If history is your thing, consider the Voyageur Canoe Paddle Through History with tours offered in both French and English. Trails in the area include the Ottawa Locks, the Burrits Rapids, the Merrickville, Jones Falls, and Kingston Mills.

In winter, the Rideau canal becomes the worlds largest staking rink a full 4.8 mile long rink through the heart of Ottawa stretching from downtown to Dows Lake. One of Canada’s finest examples of nature, culture and history in one, the Rideau Canal National Historic Site is one of the highlights of a visit to Ottawa.

Tradewinds Vacations Club welcomes you to come with us and learn more about other world famous sites and attractions. Make the most of your journey by learning before you go and let us help.