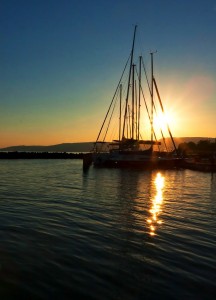 Nantucket is an island 30 miles south of Cape Cod. Together with the small islands of Tuckernuck and Muskeget, it constitutes the town of Nantucket, Massachusetts, and the coterminous Nantucket County, which are consolidated. Nantucket is a tourist destination and summer colony. The population of the island soars from about 10,000 to 50,000 during the summer months, due to tourists and summer residents.

Nantucket is home to some of the most pristine beaches in the world. Whether you prefer the gentle waters of Nantucket Sound or the wilder ocean waves, Nantucket Island has a beach you will love. With miles of bike paths to all parts of the Nantucket Island, a bike is the ideal way to get around. You can rent bikes or bring your own, and there’s even a guide offering Nantucket Bike Tours. You’ve come to an island; of course you want to have fun on and in the water on Nantucket. There is a ton to do on Nantucket: boating, fishing, seal cruises, whale watching, sailing, yachts, and more. There are island movie theaters, Nantucket music groups, and Nantucket theater groups offer a wide range of entertainment year-round for audiences of all ages. There are many festivals throughout the year: Daffodil Festival, Nantucket Wine Festival, Film Festival, and festivals celebrating maritime life, cranberries, and the arts. The island features one of the highest concentrations of pre-Civil War structures in the United States. It also has the oldest operating windmill in the United States (since 1746).

Nantucket has several world-class museums, including the Maria Mitchell Association and the Whaling Museum. Nantucket has a high concentration of artists and galleries, and has created an ongoing art colony since at least the 1920s. They have come over the decades to capture on canvas and in other media the natural beauty of the landscape, the seascapes, the flora and the fauna. On Friday evenings during the summer season, many of its galleries have open houses and special exhibits. Notable artists who have lived on, or painted in, Nantucket include Frank Swift Chase and Theodore Robinson. Numerous authors followed the influx of specialists in the visual arts. Well-known writers who are or were residents of Nantucket include Herman Melville.